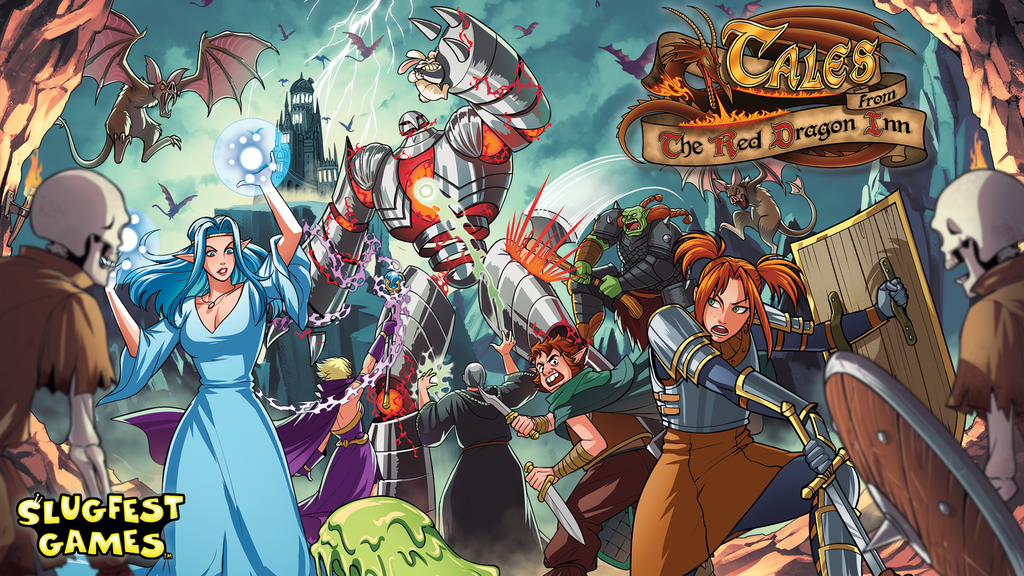 Tales from the Red Dragon Inn

If you missed the Kickstarter campaign, we've got you covered! You can still get this 1-4 player cooperative dungeon crawl board game starring characters from The Red Dragon Inn!

Latest Updates from Our Project:

We have smashed through the Pooky Stuff stretch goal! Now everyone gets to run around with their favorite rabbit familiar as a swanky plastic mini! Plus Pooky’s die is now a custom molded die instead of a boring normal one, AND any hero can take Pooky as a companion in Solo Mode.

With the Pooky Stuff stretch goal complete, we’ve finished unlocking a bunch of exciting new game modes, additional scenarios, and some other sweet stuff for every retail edition of Tales. Now it’s time to unlock a bunch of stuff for you, the backers of the campaign! The next series of stretch goals add miniatures to the Kickstarter Kit. These Mystery Minis can be used as replacements for the cardboard standees for their counterpart bosses and mini-bosses so you can have some epic fights!

So, if you unlock “NAME REDACTED” Mystery Mini, when you encounter “NAME REDACTED” in the campaign you’ll be able to use a plastic mini instead of the cardboard standee!

This is all topped off with a huge component upgrade, letting you swap all of Eve’s Illusions and Zot’s Arcane Fire tokens with plastic minis! This final reward is added directly to your Kickstarter Kit, no need to muck around with add-ons.

Our third poll was a very mixed bag that didn’t draw as hard a line in the sand as the first one did. This time around we’re narrowing it down to opinions on the size of the icons. Both icons are opaque, but the sizes are different. Is a little bit of “Where’s Waldo?” okay for maximum artwork, or do we want bigger deployment icons for quicker setup? Cast your vote on the new Google Form!

This Wednesday Sam will be hosting a Learn to Play event on our Discord channel. Join us on Wednesday at 8PM Pacific Time. Sam will walk you through how to sign up for the preview mod on Steam, some of the basics for Tabletop Simulator, and answer your questions as we play some rounds in Scenario 01.

And that’s a wrap for today! We’ll see you Tuesday for Paintin’ Time, Wednesday for Learn to Play, and Thursday for the Solo Mode Stream. We have just under two weeks left in the campaign, and we absolutely couldn’t have made this game without your support. Thank you all so much!

Greetings adventurers! We will be playing through the mid-campaign preview scenario live on Twitch tonight. This will be a great opportunity to see what the game looks like after you have a couple chapters under your belt and some fancy items to play with. You can watch the stream here:

Also, next Thursday Sam will be flying solo, showing off how palling around with everyone's favorite automaton Otto feels as!

Last update we asked folks for their opinion on how deployment spaces are marked on the game maps. With the results overwhelmingly leaning toward the new form factor, it’s time we do another test for further improvements! For reference, the letters in Option B are roughly 18-pt font and Option C are roughly 30-pt font. Please head over to this new Google Form and cast your vote on which you prefer! And after you’ve done that, join us for some adventurin’ tonight on Twitch!

We have episode two of Jen’s Paintin’ Time streaming later this afternoon, and we’re looking forward to seeing you all there! We had a blast chilling and chatting about painting minis and have taken some of your feedback to improve the experience for episode 2. You can watch the stream right here on Kickstarter when we go live, or hop on over to Twitch.

With the last flip map unlocked, we’ve got our sights on some sweet quality of life upgrades! Molded dice, another mini, and even more ways to play with Pooky! And while we are on the topic of maps...

During development, we asked our playtest team if they preferred big obvious deployment spaces or smaller more subtle ones. The easy setup fans narrowly out-voted the theme focused playtesters, but it seems like those opinions may have shifted given the chit chat in the comments and discord channel. So we turn to you! We have a new, more subtle version of deployment spaces and we need you to vote on whether or not we change things up. So head over to our Google Form and cast your vote!

After you’ve cast your vote, don’t forget to come join us on Twitch.tv for Paintin’ Time! See you all soon!

Developing your hero over the course of the game is an important part of any dungeon crawl. When we were designing the progression aspect of Tales we wanted to make sure that you felt like you were playing as a familiar character, but that you had plenty of power to adjust that character to fit your style. We called this: “You’re playing Fiona, but she’s your Fiona.”

Today we’re exploring how you can adjust and evolve your character over the course of the game!

Hero cards are unique abilities that each hero brings to the table in Tales. As the campaign unfolds, each hero will unlock new hero cards at the start of each new Chapter. You can think of them as Tales’ method of “leveling up” the heroes.

New hero cards will either expand the number of different abilities available for you to select during scenario setup, or replace abilities that may have become obsolete. In later chapters, you will gain access to more hero cards than the maximum of four you can bring with you into a scenario. Your choice of which cards you want to bring with you will have a huge impact on how you’ll play each time!

Item cards are shared by all heroes in a supply called the Armory. You will add new items to the Armory at the end of each scenario, and will divy up the cards among yourselves during scenario setup. There are no restrictions on who can use what item, though individual items may have an added effect when equipped by a particular hero.

Just like hero cards, items will upgrade over the course of the campaign! By reaching specific points in the campaign or by achieving certain milestones, you will replace cards in the Armory with improved versions.

Items come in three classes: Minor, Masterwork and Epic. Minor items usually have exhaustible abilities and provide some utility effect. Masterwork items usually provide you with additional abilities, not unlike those found on hero cards. Epic items are wild! They can provide all manner of unique abilities or simply supply you with bonus Power Tokens.

During Scenario Setup, each hero will equip one of each class of item. Early on, Epic items will be very rare, and the party will need to decide together who benefits most from them.

The Power Tree is the cherry on top of your custom hero sundae. We implemented it because playtesters wanted a way to incrementally adjust the base “stats” of their heroes. In Tales, you will make these micro adjustments by claiming power tokens on their hero’s unique Power Tree.

During scenario setup, you will be told how many steps on your hero’s Power Tree you may claim. This works out to roughly one spot every two scenarios. Each Power Token provides a generic Discard ability, and your choice of hero will determine what Power Tokens you may have easy access to.

In addition to the Power Tree, heroes may gain bonus Power Tokens from equipping specific Hero and Item Cards. Make sure you check the setup flag in the top left corner of these cards at the start of each scenario!

With all these different levers to pull, you will have a ton of freedom for adjusting the capabilities of your favorite heroes. Furthermore, none of these levers are permanent! You are encouraged to play around, try different builds, or adjust your playstyle to the scenario at hand! Given the amount of flexibility available, let's see two different builds for a late-game Fiona. Each of these builds are possible in Chapter Four:

This build for Fiona is decked out in Reaction and Shenanigan abilities that help you absorb piles of damage while dishing out a bit of off-turn damage yourself. By emphasizing off-turn damage with this build, you can take advantage of Fiona’s incredible base Move of 5 to stay in a good position, while still contributing damage to the board. Because the hero cards lean so heavily on survival, you’re left with very few actions, so picking some high damage action items and power tokens compliments the build nicely.

This build for Fiona is ready to rumble! Stacked with high damage and high mobility hero cards, you can focus on making the most impact possible each turn. The loadout lets you close gaps between your figure and possible targets, usually while also damaging them! This leaves you open for follow-up Shenanigans or Actions to either retreat to a safe distance or pile on more damage. These “hit-and-run” or “hit-and-hit-some-more” tactics are complemented by her equipment and power tokens. Her helm and belt provide a bit of protection from a bad initiative draw while her power tokens keep her from getting dogpiled by Evading away after the first attack from her foes.

And that’s a wrap for today’s update! We’ll have another Paintin’ Time with Jen on Tuesday, as well as an update on stretch goals and other fun things. We thank you all again for your support so far and are thrilled to be making this game the best it could be. We look forward to seeing you all soon!

Today we stream Scenario 2 with special guest star Will the Hungry Gamer! We hope to see you all there, but while you wait, let’s talk about some of the awesome stuff that’s happened over the last few days!

Jen hosted the first Paintin’ Time on Tuesday. It was great chatting and trading painting tips with you all! We’ve uploaded the recording to our Youtube channel so you can check in on those tips once again. And since a picture is worth a thousand words, we thought it’d be fun to get some nice snapshots of the progress Jen made on Gerki and Zot so far:

We’ve unlocked two of our three enhanced scenarios, expanding those exciting boss-tier scenarios as well as two more of those bosses getting a miniature in the Kickstarter Kit!

But this is only the beginning. We have the penultimate flip map and its double mini unlock coming up, followed by custom molded Scheme Dice, and what you’ve all been waiting for, the awesome pile of goodies for Pooky!

We are also thrilled to share that the fun folks at Achievement Hunter are having a blast playing Tales as well! So if you love yourself some Gerki - and his mighty spoon - join them for Part 1 of their own adventure into Scenario 2 on Let’s Roll!

And that’s it for today! We look forward to catching you on stream this afternoon! Thank you again for all your support so far! Look forward to Sundays update where we dive deep into how your heroes develop over the course of the campaign!